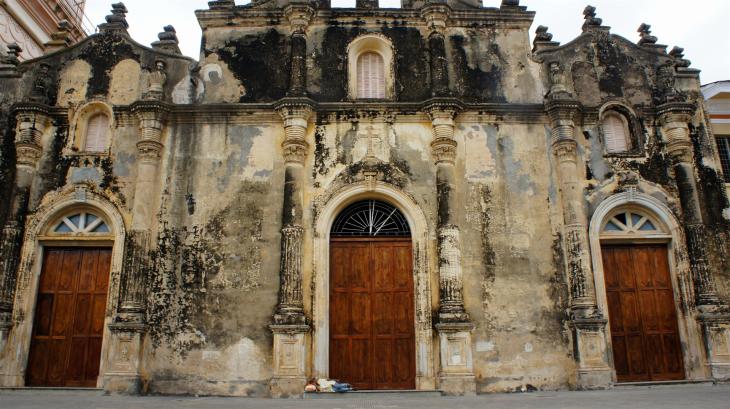 I didn’t do much my last day in Granada. After walking around and updating my blog, I walked around some more and continued my “Men Passed Out In Public” photo series.

This guy was out immediately next to the main church in the city. 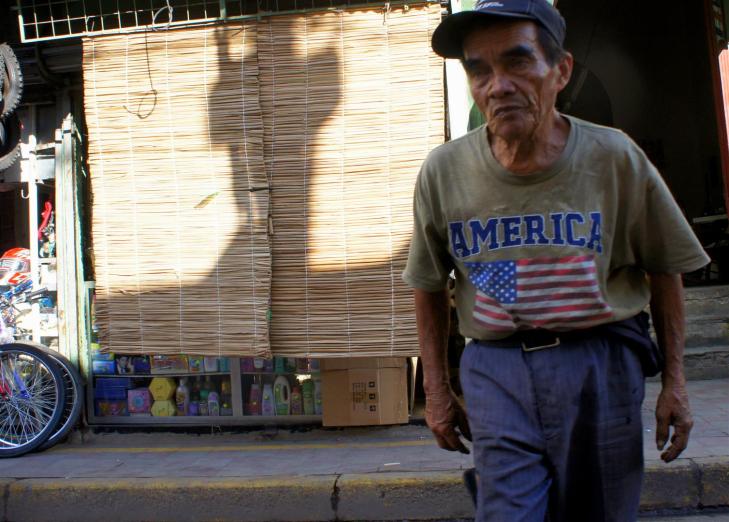 And this man was more patriotic than me.

I’ve seen this chain of stores a few times now, and always found their logo inexplicably amusing. On my last day I finally got a photo of it.

At 5:15, while waiting to watch the sunset with German Guy from atop a church (how romantic!) I saw a real-life nun! I didn’t see any miracles when she walked by though. 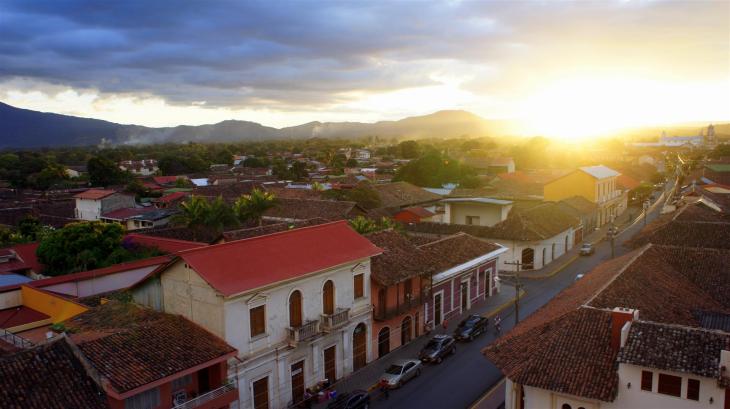 The sunset was pretty good.

As was the view in general.

I’m still uncomfortable around churches though. 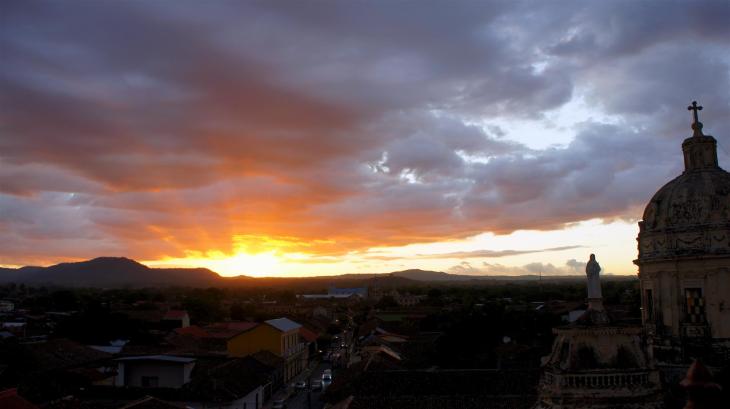 After the sunset, I had dinner and a beer with German Guy before excusing myself to go back to my hotel. There were only so many sex-tourist stories I could hear before things got uncomfortable.

The following day I caught the public ‘chicken’ bus from Granada to Rivas (I had to stand with my bag for 75 of the 90 minutes), then a taxi to the ferry that would take me to Ometepe.

I met some cool Canadian guys on the ferry, along with a couple(?) from Boston! None of us knew anything about the island, other than that it has two volcanoes.

When we arrived, I was distracted by a taxi driver who offered me a ride to Santa Cruz. It was a name I had heard in passing as a cool part of the island to visit, and he was waiting with 3 cute Australian girls, so I jumped in the van.

The hostel they had reservations at was full, so I was dropped down the road at a totally empty (and not particularly nice) place. But as soon as I left my room to walk back up to join the girls at their place for dinner, a car full of the Canadians (and their German friend Ruth) pulled up. We chatted for a bit and all walked up together for dinner and drinks.

On my first full day, I joined the Aussies to hike the smaller of the two volcanoes. At ~1,375m though, it’s still quite big. Above is our guide Juan, who did the entire (what turned out to be a) 10 hour journey through obscene amounts of mud and heat with absolutely no water while wearing jeans. 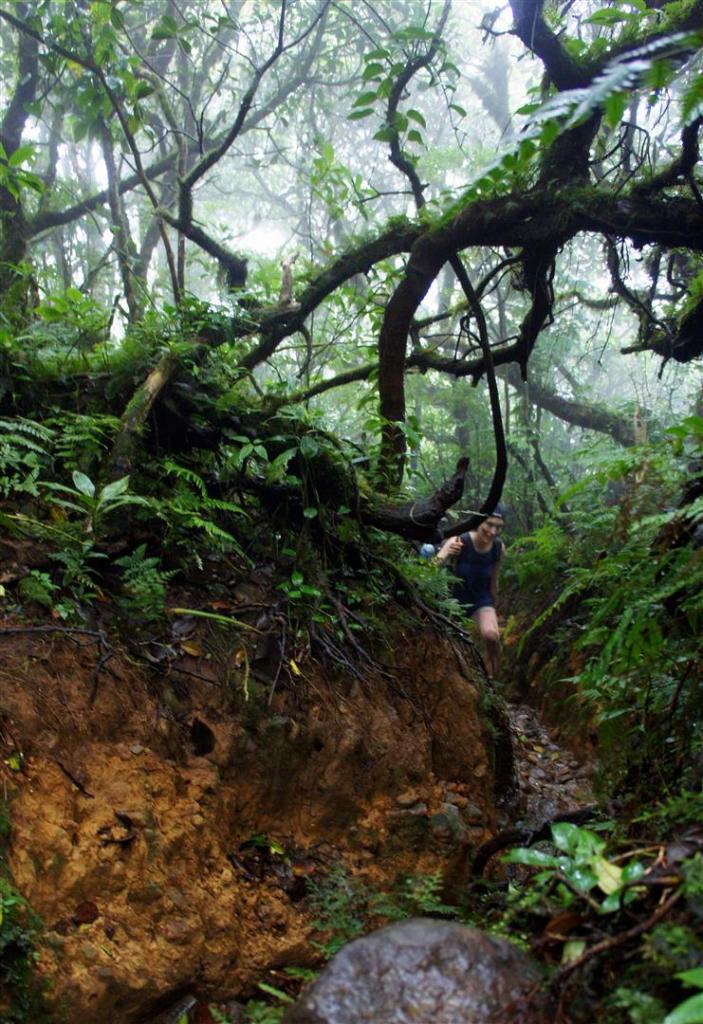 The first hour was through beautiful farm areas, and up a really gentle slope. But quickly things got wet, muddy, and steep. 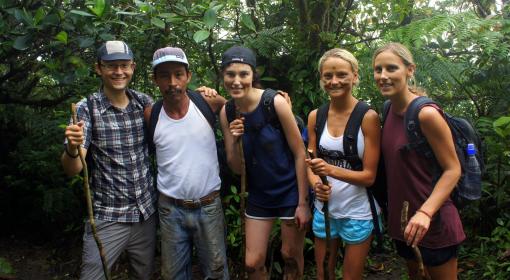 Part way up, Donna and Amanda decided to decorate their faces with the mud we were now covered in. (Note Donna’s knees.) This photo is from the highest point of the climb, but it wasn’t halfway. The top of the volcano is a crater with a lake inside of it (a lake in a volcano which is on an island in a lake). We still had to hike down to the lake, and the day before our hike an enormous tree had collapsed across the trail, forcing us to scramble 10 feet up and over and 14 feet down the beast, covered in mud and exhausted, before we could reach the lake.

Donna’s feet & legs by the time we arrived

Apparently the mud is always there in the winter, but no one told me beforehand. Definitely would have made some different clothing choices had I known…

The lake was gorgeous though.

And I took a Jumping Jack. 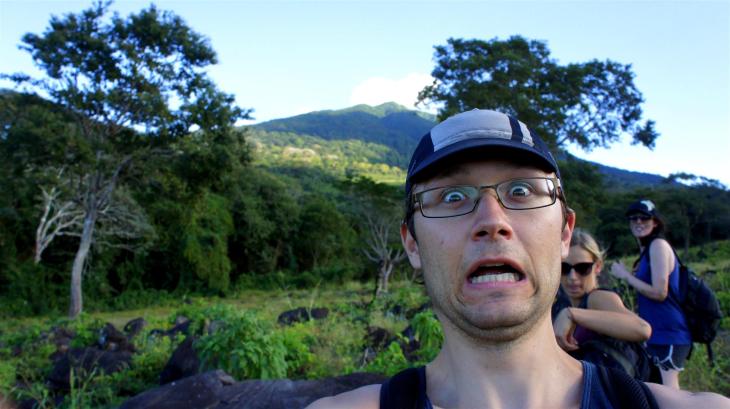 But I was still pretty traumatized by the time we got back to the farm fields.

Today I walked down to the beach where I saw two wild horses run down to drink. At first this concerned me, since they shouldn’t drink saltwater. But then I remembered that despite the waves, it’s just a REALLY big freshwater lake. With sharks. (No, really. Look it up.) 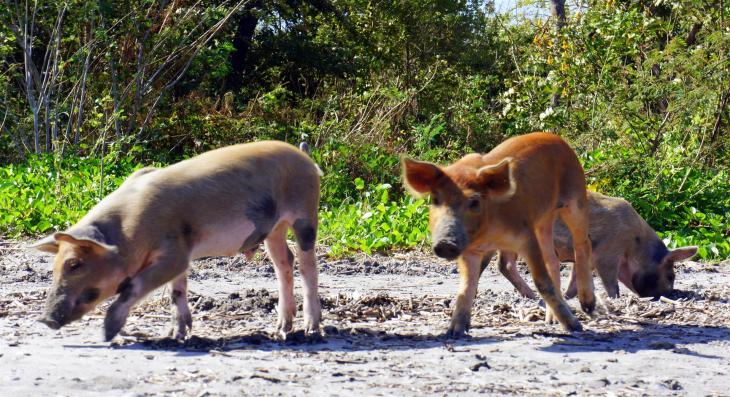 Then I turned around and saw pigs.

And looked up and saw a bunch of vultures.

The Canadians all rented motorcycles, so Ruth and I walked an hour along the beach to a mineral springs a few towns over.

We saw a monkey on a truck along the way.

And I took another Jumping Jack to make up for the lack of them in my last few posts.

Ruth and I cooked linner in the hotel kitchen, and I tried to shower but the water cut off as soon as I got my hair wet. I think tomorrow I’ll rent a bicycle to explore more of the island, and try not to get any more sunburnt.

(Thanks for wishing I get sunburn, Jay. It worked. Jerk.)