I’m finally back to internet, and with some free time, too. Guess it’s time for an update! But first, a quick look back at January 24th.

I mentioned on the 23rd that I was going Volcano boarding with Bigfoot Hostel in Leon, but I never posted anything about it post-boarding. That’s because I was waiting for photos, which I’ve finally got:

About 25 of us made the trip. Volcano Cerro Negro is about an hour outside of Leon, and is a really bizarre site to see. Rising up from the surrounding farm fields, and less than a kilometer from another normal volcano, Cerro Negro is a giant cone of black ash. No plants grow on its slopes, and while half of it’s littered with giant boulders, the other half is totally smooth.

I didn’t bring my camera because we were warned that A) the ash was so fine it would seriously compromise camera integrity, and B) if you hiked up with it, you’d have to board down with it – and risk crashing out and destroying your equipment. The tour guides bring a DSLR to photograph the group, so I left mine at the hostel. 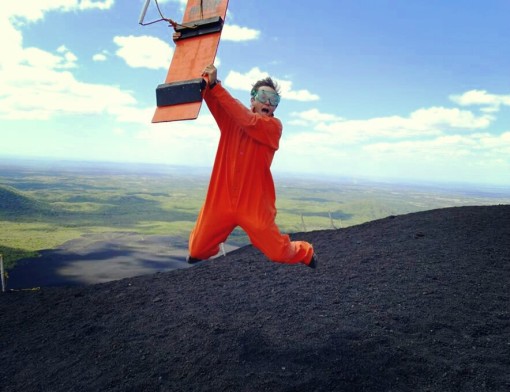 We hiked up with our boards in the blistering sun and insane winds, the boards acting as sails and nearly blowing us off the edge.

Once at the top we walked over to the crater (yes, the volcano is still active) and watched the steam vents and experimented with how deep we could dig in the sand before it became so hot we couldn’t touch it anymore. Then we changed into our orange prison jumpsuits and realized the slope was so steep we couldn’t see the whole trip down from where we stood.

Bigfoot’s bus driver stands at the bottom of the slope with a radar gun to measure your speed. Being super pumped to slide down a mountain of jagged rocks on a piece of wood (and hoping to witness some of the inevitable crashes of my trip mates), I volunteered to go first.

My top speed was clocked at 61kph, which I’m pretty pleased with. (The day’s fastest was 70kph  and the all-time record, to put things in perspective, is a mind-boggling 93kph!)

Crashing at 61kph wasn’t as awesome, but I didn’t break anything so I’ve got no complaints. I saw some spectacular crashes, too, and no one else got seriously hurt (I may have actually been the worst of the group):

It was super fun, and something I don’t think you can do anywhere else in the world, and I’d definitely recommend it to anyone with substandard regard for their own safety.

Now that that’s recapped (and you’re sufficiently grossed out), let’s return to our regularly scheduled programming and get this blog back up to date:

In my last post, I was about to leave Ometepe – which I have since done.

My Belgian friend Eugenia and I caught an 8:30am bus across the island to the town of Altagracia. There’s nothing in Altagracia except the ferry, which meant we spent a very long 12 hours waiting around until it finally left at 10:30pm that night.

The double decker boat has two different classes of passage, with non-Nicaraguans only allowed to buy the more expensive ticket and sit upstairs. Eugenia and I watched The Wolf of Wall Street and then I fell asleep under a bench for about 4 hours until we arrived at 5:30am.

After having our bags searched by blue-camouflaged military men, we disembarked and stumbled exhausted through San Carlos to a hotel where we promptly took a nap.

San Carlos kind of sucks. There’s nothing to see or do there, and the only reason tourists ever go is because it’s a transportation hub along the Rio San Juan. Eugenia is traveling slow, though, and I was waiting to meet up with the Canadian girls from Ometepe, so we spent the day exploring town, visiting the ‘fort’ (which is just a hill that supposedly USED to have a fort on it), and sitting around a lot.

The town had a lot of young guys walking around with their shoulders draped in belts and their arms covered in watches that they were trying to sell. Not really something I would impulse buy it from a hawker who interrupts my lunch, but hey, what do I know about local Nicaraguan supply-and-demand economics.

The hotel we spent the night in had no running water for about 20 of the 24 hours we were there, smelled of sewage, had a dead bat in the hallway, was blisteringly hot, and was not close to town.

The next morning, when Eugenia left to head down the river, I switched to a much nicer (but pricier) place and spent the majority of my day downloading videos and watching movies. The Canadian girls, Ainsley and Amanda, arrived late that night from Managua.

The next day we grabbed the first available boat down the river, where we disembarked at Hotel Grand River Lodge. Totally isolated along the banks of the river, HGRL is like a tiny slice of paradise. Run by a husband and wife who live there with their two kids, it’s a collection of 10 thatched-roof bungalows in a beautiful garden and farm.

Eugenia, who I feel I should share speaks Dutch, French, English and Spanish fluently, was there when we arrived which was nice. We spent that first day eating a home cooked meal, and having a few drinks along the river while watching the sunset.

The following morning the husband took us on a cocoa tour, Eugenia translating, explaining the history of the various types of cocoa plants and their growth and harvesting.

The farm had a mother pig with three piglets. Like the mother dog with three pups that I somehow feel responsible for killing on Ometepe, our second night at HGRL the mother pig also died in a rather unpleasant way, leaving her piglets orphaned. She spent the evening and night wheezing and crying in pain, and, according to the owners, was probably bitten by something poisonous and slowly killed by the venom. We got to listen to her cries all night. Lovely.

Maybe stay away from me if you have triplets anytime soon.

From HGRL, we took a local chicken bus (with a TV playing a DVD of 80s hits, including Tina Turner (whose hair really did look just like Gramma TT’s did, Dad)) to the small town of Boca de Sabalos, where we then caught another boat further down the river to the town of El Castillo.

El Castillo was a beautiful riverside town, whose claim to fame is the hilltop fort overlooking the river. We arrived late in the afternoon, so the first night wasn’t much but showering, getting (an overpriced) dinner, and watching a movie. The next day I went for a run (yes, really!) and we visited the fort. In the evening we took a two hour cayman tour down the river.

Cayman are basically small alligators (or crocodiles? who knows the difference). Basically, our guide would use his flashlight to catch sight of their eyes (they reflect, like cats), and then he would jump in the river and grab them. Personally, I think jumping into water to grab carnivorous giant-teethed DINOSAURS is pretty batshit fucking insane, but hey, I guess you gotta make a living. He found and we got to hold two on the tour.

The next day we woke at 4:45 to catch the 5:30am fast boat back to San Carlos. Except apparently you need to make reservations on the 5:30 boat, and it was full. So we waited for the 6am slow boat. Which didn’t come. So we took the 7am slow boat. It was crazy foggy. We arrived back in San Carlos at 10:15, with literally two minutes to spare after again clearing the blue-camo’d bag check and Nicaraguan immigration to get on the boat to Los Chiles, Costa Rica.

Everyone on the boat was wearing life vests, which they all promptly removed immediately after passing the Nicaraguan river border patrol 20 minutes into the trip. Once in Los Chiles we got to skip the customs bag check that everyone else had to wait through because we’re white, and got our first meal of the day.

From Los Chiles it was a bus to Ciudad Quesada (which I can’t take seriously, because it sounds like Cheese City), and then a second bus to La Fortuna.

In La Fortuna we found a room with 3 double beds, air conditioning, a TV, hot water, and a pool for $10 each.

In La Fortuna we took the public bus to the National Park at Volcano Arenal. We were hoping to hike to a waterfall, but the hike was actually from 9km further down the road than the park (and from a private hotel), and we didn’t have to time to do that before the one bus back in the afternoon. So we explored the park, talked to the old people in the tour groups, and generally felt like we were back in the States/Canada.

That evening we walked pretty far out of town to a giant locals bar that was supposed to have a dance club – which it did, but no one was dancing. So we had just one drink and went back to the hotel.

Day two, Ainsley and I took a short taxi ride to the La Fortuna waterfall. It was a fun and relaxing way to spend the morning – and I was able to sneak-swim my way behind the waterfall without the security guard noticing. We decided to walk back into town, and I found a dirty cow skull along the side of the road. Which of course I played with, because I am a 12 year old boy.

From La Fortuna we took a shuttle to a boat to another shuttle to the town of Santa Elena/Monteverde. Monteverde is the place to explore the cloud forests, and just while walking around yesterday we saw a momma sloth and her baby in a tree. (There was only one baby though, so the mom didn’t die this time.)

Yesterday we had our Sunday family pasta dinner, and I bought new shoes (a super necessity since the soles of mine actually had holes in them). This morning the girls went on a tour of a Quaker cheese factory, so I took the time to start this post. This afternoon we’re hunting for a giant ficus tree you can apparently climb the middle of for ~30 meters and then hang out in the canopy, which I’m really excited for.

Costa Rica is a LOT more expensive than Nicaragua. I averaged just over $28/day in Nicaragua, and food here is at least twice as expensive, and activities are probably 3-4 times as much. It’s a very, very different vibe, too, as most people speak at least some English and the infrastructure is much more developed. There’s also a lot more tourists, and a lot more old tourists.

I can see why people love coming here for short trips, but I don’t think I’ll spend much time. We’ll see, though – there is a lot of beauty here.