We spent our last full day in Monteverde in the cloud forest.

After sweltering in Nicaragua and La Fortuna, it was pretty bizarre to find ourselves in the cloud forest. Monteverde was pretty windy, with frequent and almost inexplicable sunshowers and a strong chill at night. But the cloud forest was something else. 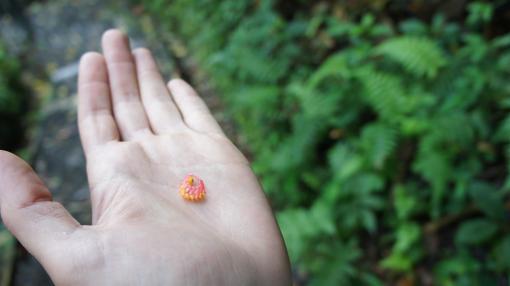 The drive to the forest took about 35 minutes, primarily along a rutted and exceptionally dry dirt road. But almost immediately upon pulling into the Reserve entrance, everything was damp. And the dampness only increased as we explored the park. Everything was wet, with a persistent dripping, if not outright raining, from the moisture on the leaves above us. And it was cold. 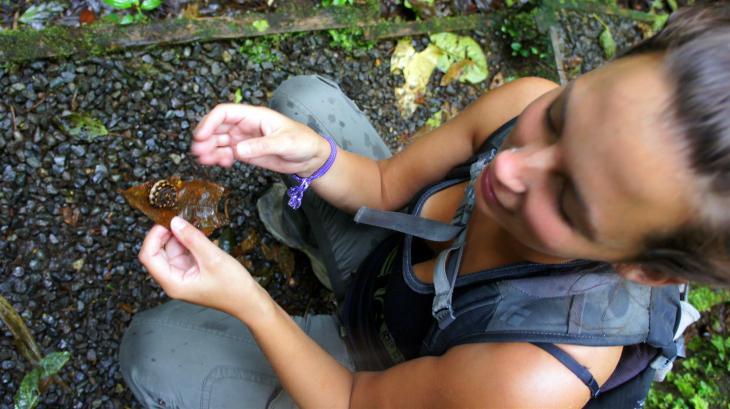 We were told there were sloths and monkeys in the forest. Mostly we saw just birds and caterpillars, but we did catch a fleeting glimpse of a group of monkeys (during the time we were running back to the visitor station as it started to seriously rain).

The vegetation was so green and so thick and the mist was so heavy that this, too, felt like a Disney set. Except this time I couldn’t help but think we were on the E.T. ride.

“Cloud forest” is about as perfect a name as any that you could give this area. They never let up while we were there, and from what I’ve read almost never leave, period.

The benches scattered throughout the park were interesting – I’m not sure who they thought would be sitting on the rotting, moss-covered, soaking wet wood. Wasn’t us, though. 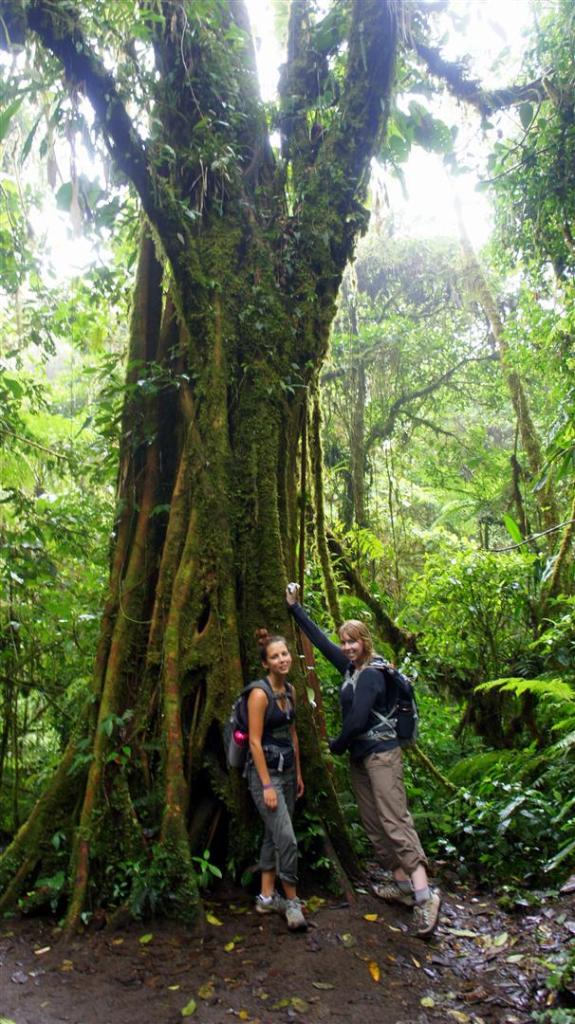 ^I think this is probably illegal

Toward the end, we found an observation tower and climbed to the top. And saw nothing but clouds and rain in our eyes. And then we got down and saw that there was a 2 person weight limit at the top. Whoops!

And then we drove the 30 minutes back into town and were suddenlyhot and dry again. Bizarre.

From Monteverde we took the bus to Puntarenas, and the ferry from Puntarenas to Paquera.

From Paquera we caught a bus to Montezuma, a small town along a stretch of tropical beach. 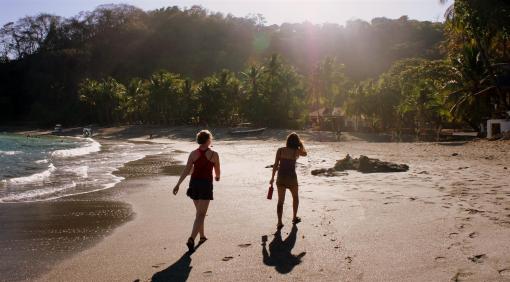 Some folks had a bonfire on the beach our first night. This photo was taken from right behind our hostel on the beach.

On our first full day we hiked to the local waterfalls.

There were lots and lots of people, but that’s because the waterfalls are really fun, really deep, really easy to get to, and, best of all, really free! 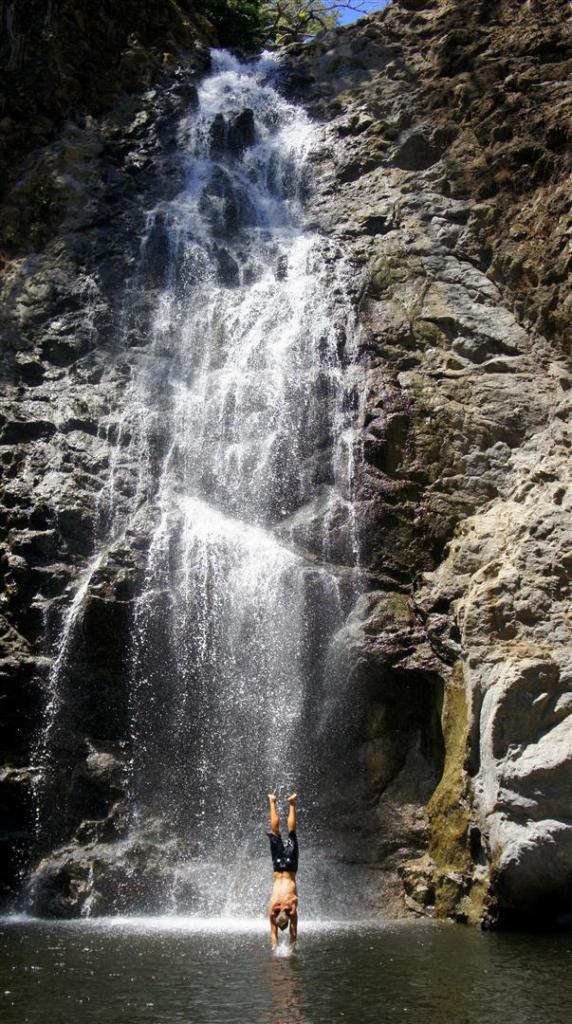 This photo, which I’m super super thrilled with, was taken at the lowest of the two falls. From there we hiked (or more accurately, climbed) up (and then down) to the top of the first waterfall.

There’s a watermelon in the bag

The top of the first waterfall has a rope swing and tree to climb up and jump off. 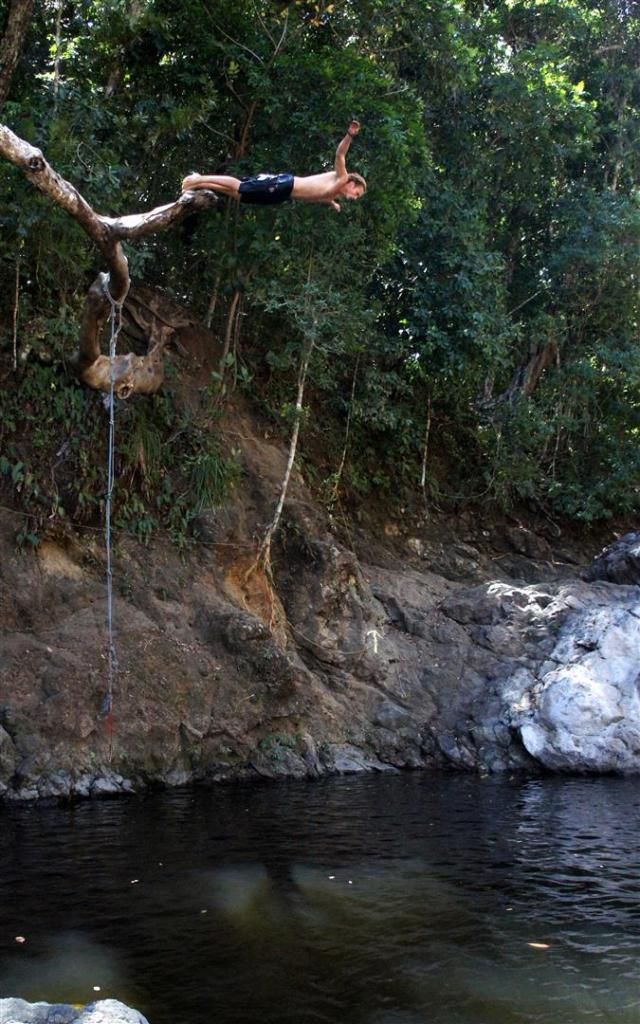 After I fortified my courage with watermelon, I made the 10m jump from the top of first waterfall.

After that, I tried to save a dog who climbed up the trail but couldn’t get down. It didn’t work. Then we went back into town and ordered dinner at a restaurant showing a movie.

I actually ordered a $14 thai curry, which was not only obscenely expensive, but also obscenely back. I actually sent it back to the kitchen, which is something I have never done with a dish before. So I had Doritos and Oreos for dinner instead.

Our last day in Montezuma was spent snorkeling along the beach.

The rough waves and large rocks made it difficult to see much, and I managed to get myself slammed by the former into the latter and spend the day bleeding all over the water. Fortunately it was too shallow for sharks.