On October 12-14, we took a trip up north with our entire program. We spent time in the Golan Heights, and around the Sea of Galilee.

Day one, we went to visit another program of 20-somethings, who were working for a social organization that had a few projects, among them working with a local Arab school and a farm that provides work for developmentally disabled adults. It was set in a beautiful pine forest. 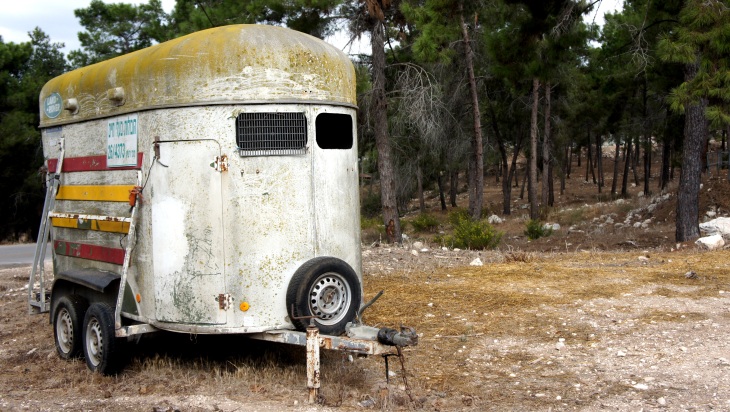 We split up into three groups, one going to the school, another doing a theater activity to explore Judaism more, and the third visiting the farm. I would have preferred to go to the school, but since I wasn’t wearing long pants and they have extreme views of modesty, I visited the farm instead.

Unfortunately, we didn’t really interact with anyone, or learn much about what the adults that work there do. We just weeded for about 20 minutes, and then asked 3 of the people on the social program about how and why they chose to do it.

After that, we drove to Har Meron הר מירון, the highest peak in Israel proper, for lunch and a walk around the summit (the actual summit itself is the site of a large military base). I had been there on birthright, but only remembered once we got to the lookout point. 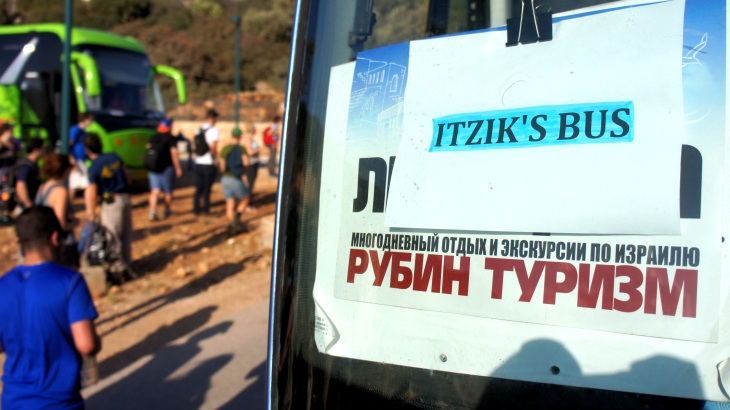 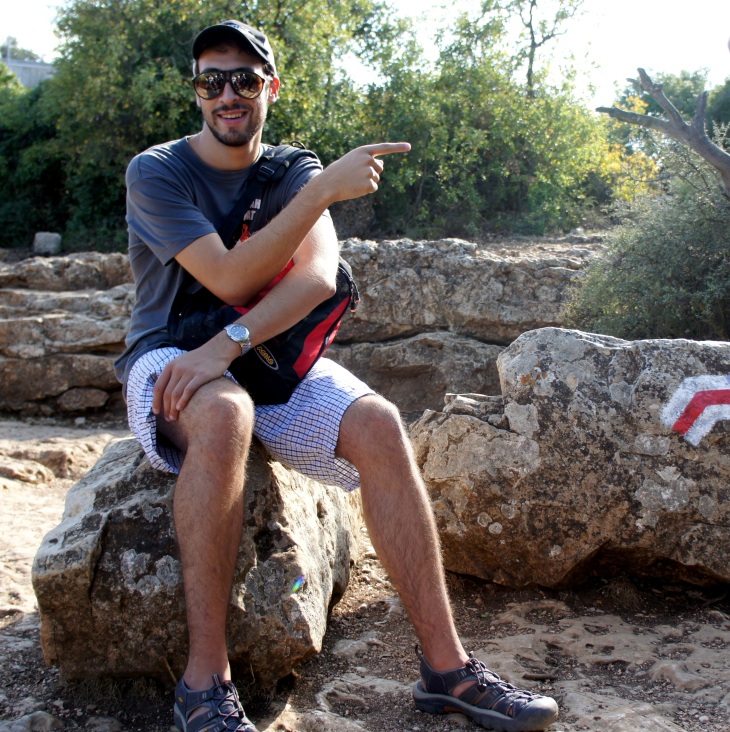 After the mountain, we met up with a group of volunteers who, once or twice a month, visit different Israeli farms to help the farmers patrol against vandalism and theft, and often to help with physical labor around the farms. Since the farms are typically run by just one family, the assistance of hundreds of volunteers, even over just one day and night, can make a huge difference. 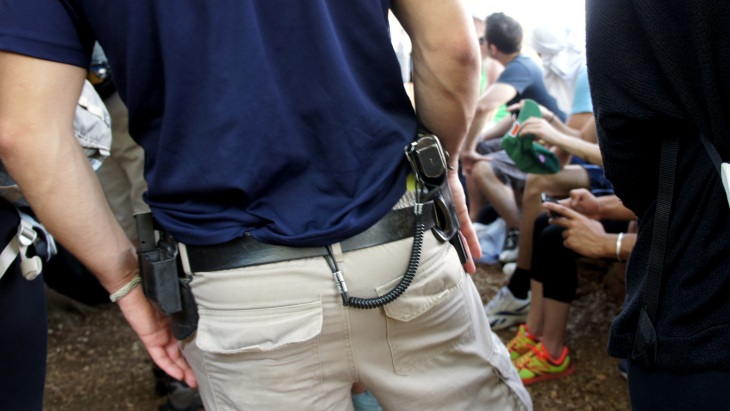 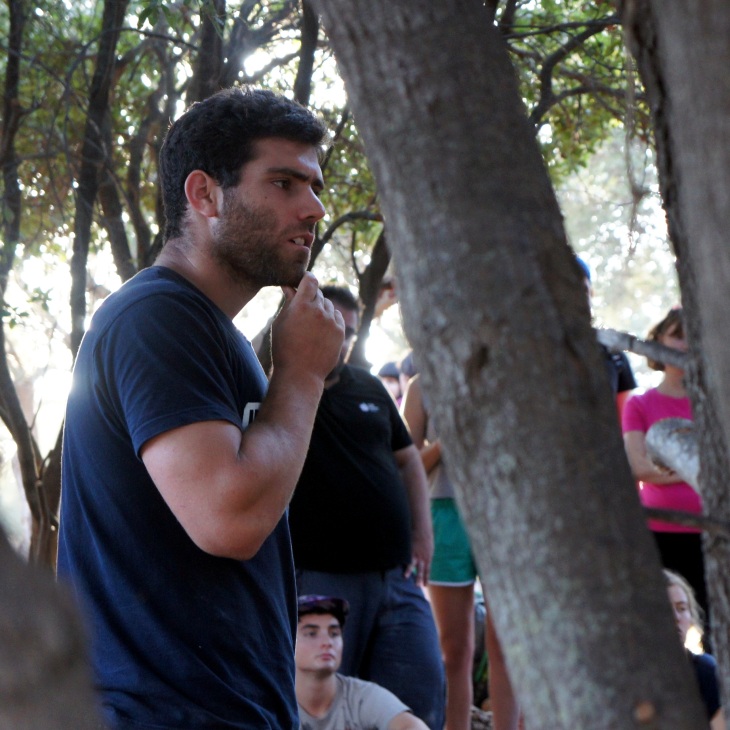 The Israeli son of a Boston-born mother who told us about the program. And who all the girls fell in love with.

After the talk, we helped harvest olives. Which involved climbing trees, raking the leaves of trees, and getting hit on the head by olives falling from trees. 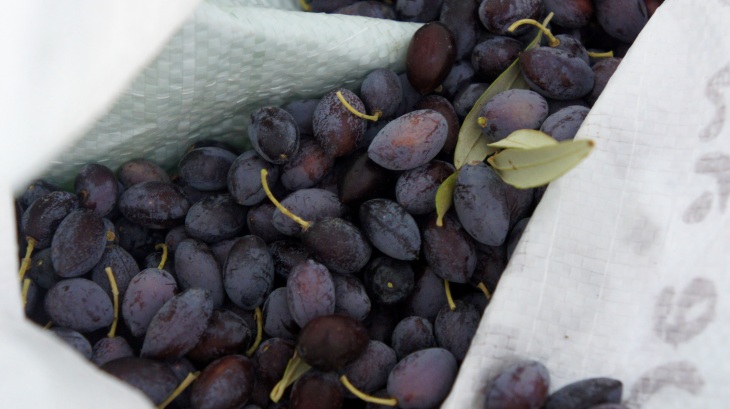 We spent that night in a nice hotel on the shore of the Kinneret (better known as the Sea of Galilee). 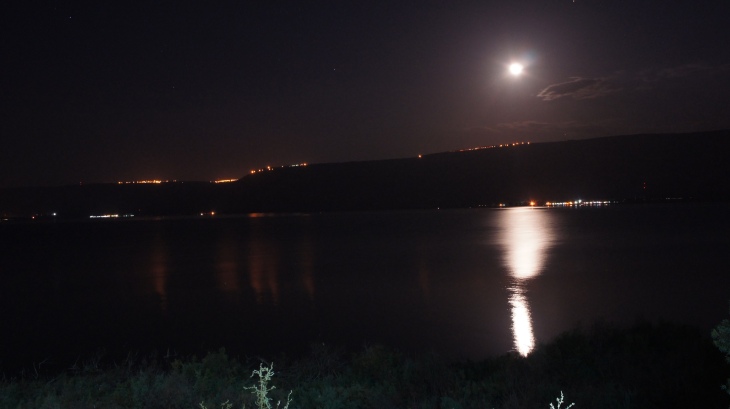 The next day, we had the choice of a long or a short hike option. I chose the longer hike, which took us through farm fields, and then down into a canyon with a river running through it. 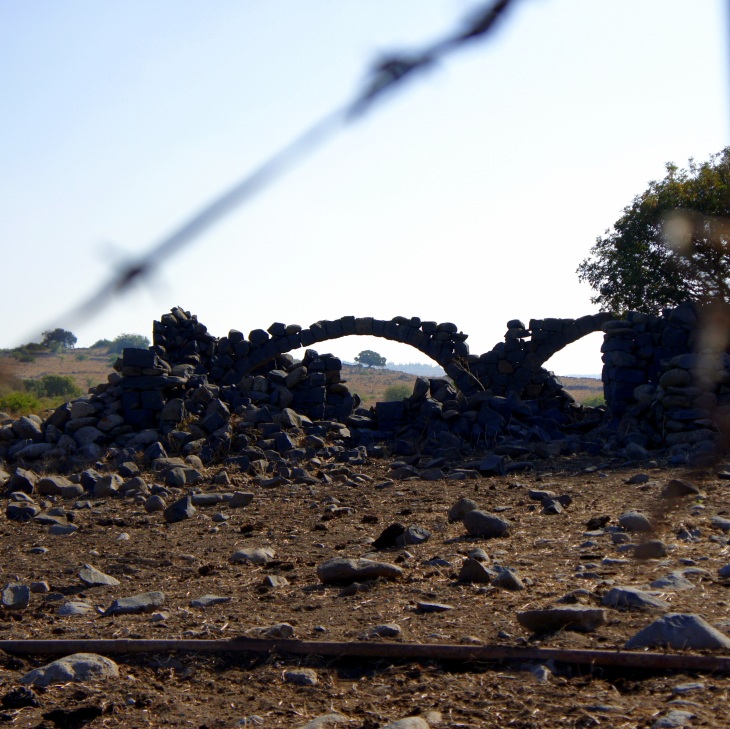 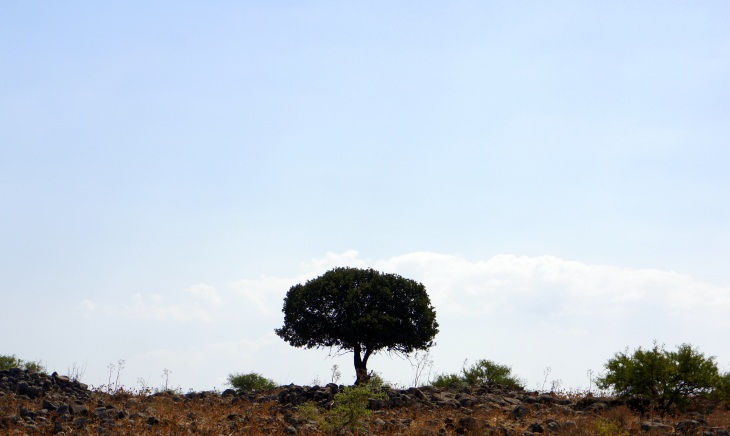 There were no restrooms along the way, so people made due with what they could. I call this photo, “The Pee Amigos.”

There were a few mud obstacles along the way. Some people made it through quite gracefully. 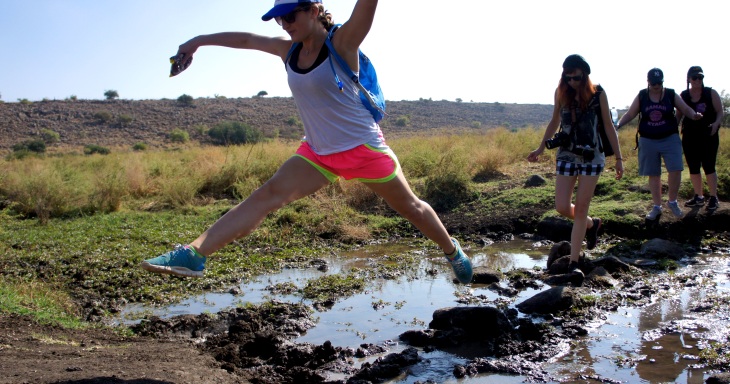 Others…. not so much. 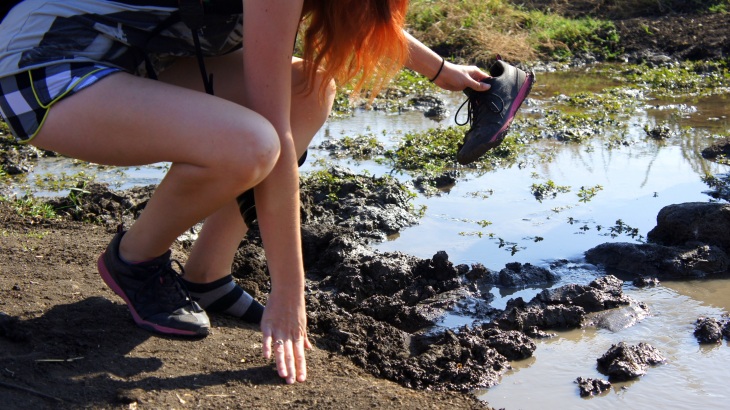 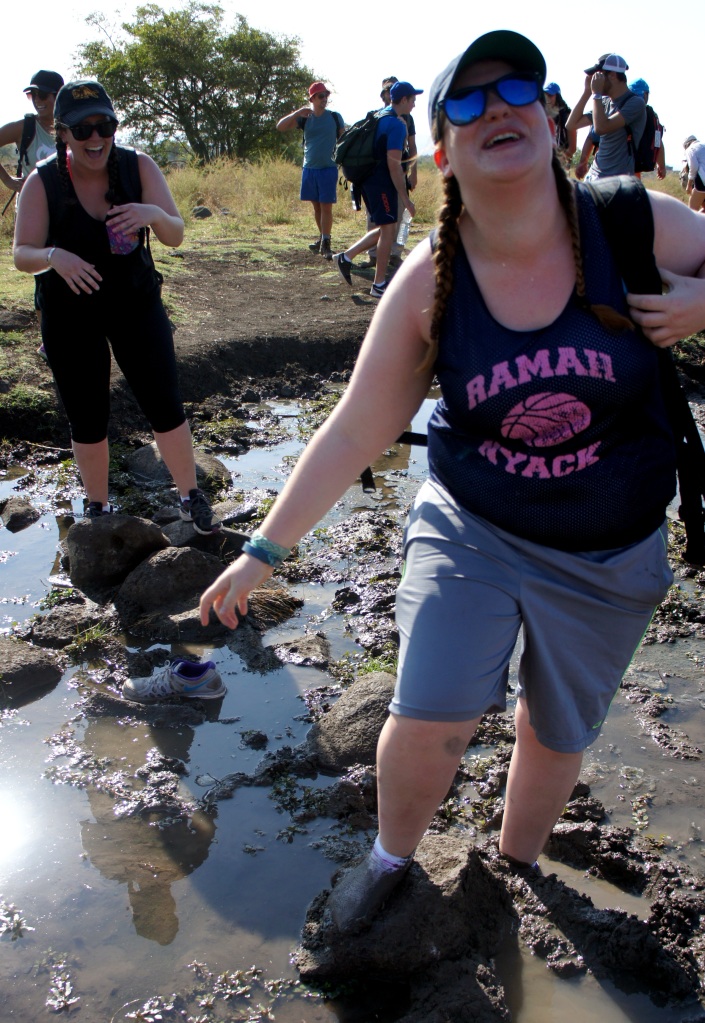 And some people got really fucked:

Hope you got that mud out, Val.

Eventually, we got to go swimming (“NO JUMPING!”) in an area with really cool hexagonal stones.

After the hike, we went rafting down the Jordan River, which I have no photos of because my camera isn’t waterproof. I did find one of me hiding from the water, though:

That night, we went to Misgav Am, the northern-most kibbutz in Israel that’s surrounded on three sides by Lebanon. There, we listened to a sexist, 74 year old asshole farmer formerly from Ohio tell us about throwing handgrenades over his fence to kill Hezbollah fighters during the 2006 conflict.

It was really creepy and hilarious. 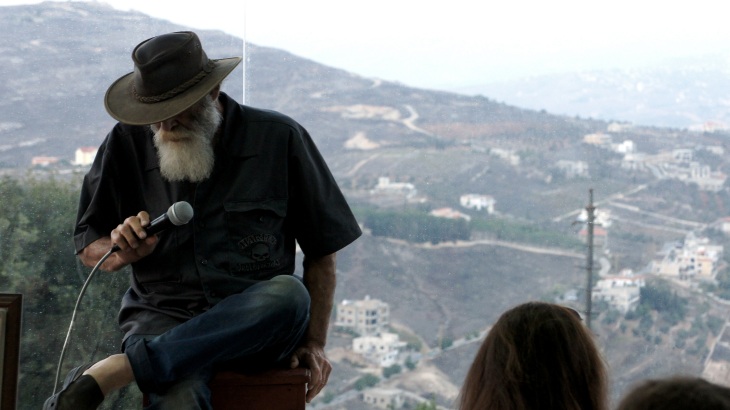 Nice view across the border though.

After the kibbutz, we drove to a Bedouin tent, where we had dinner and a campfire before going to bed. The first thing everyone did though was plug in their electronics. This is 6 phones and one camera battery plugged into a single outlet: 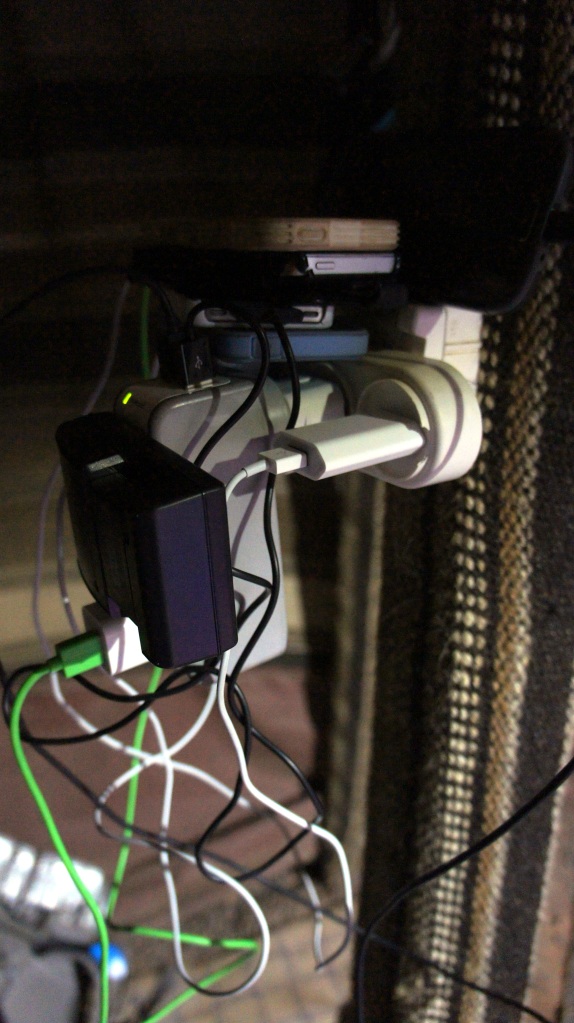 And yes, I was sleeping directly under this Fire Marshall nightmare. 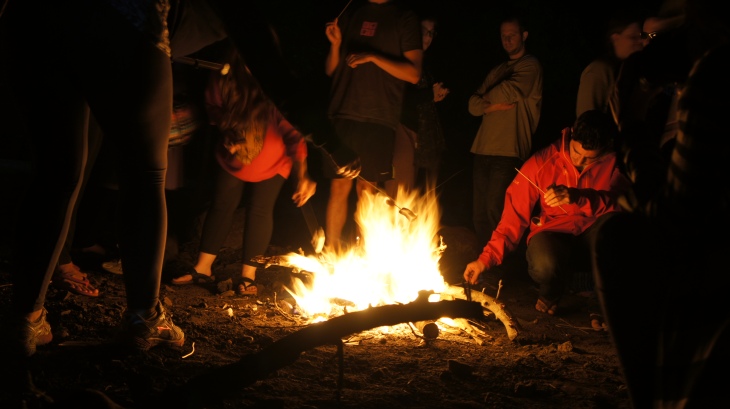 Bonfire was cool though.

The next day we visited a school in an Arab village.

I think this guy was being written a ticket, and didn’t appreciate me photographing it.

We had to dress modestly, but we were able to spend about an hour talking to 15-17 year old high school students about their experiences growing up as Arabs in an Arab village in Israel, and the similarities and differences that they as minorities face there and we as a religious minority face in the United States.

After meeting the students, this teacher took time out of his day to talk to us about what life has been like for him. While Christian, he is a Palestinian and self-identifies first and foremost as a Palestinian. He explained to us that he feels like a second-class citizen in Israel, and feels that the country cannot be a true democracy while also being religious. He expressed his frustrations with what he sees as inherent racism and religious-preference that is built into the Israeli government, and shared his wishes for an environment in which he is treated just as everyone else.

There were students in my program who were too close-minded and too uncomfortable having their privilege and prejudices challenged, however, and they were amazingly rude during the talk. The presenter actually stopped at one point, to share that we were the most disrespectful group he has ever talked to. It was truly shameful to be associated with such awful actions. Worse than that was the knowledge that, just the night before, we had been listening to a man who literally told us he did not care about our opinions and we were too young to have anything of value to say, and not only did no one interrupt him or treat him unfairly, but they lapped up everything he had to say because he was a Jew and they agreed with his views. And yet, here was this Palestinian man who let us into his community and tried to share with us the reality of his life, and we had students telling him to “Go back to Gaza and Hamas.” It was disgusting, to say the least.

Fortunately, there were quite a few students who stayed after the talk to thank him for his time, and make it clear that the few vocal assholes were not representative of the rest of us or our views.

After the village we had a great lunch at a beautiful hotel on the water, and while everyone else went swimming, Shayna, Rafi and I took a trip into town to buy the last few things for our cross-country hike.

At 4pm, when everyone got on the bus to go home, we set off for a town further north along the Kinneret.

Shani and Robyn joined us for the first night.

After two bottles of wine and a long decompression discussion about what we had experienced in the Arab village, we went to bed around 10 to be up for an early start to our hike.

My next update will have photos and stories from our four days walking our way across Israel!