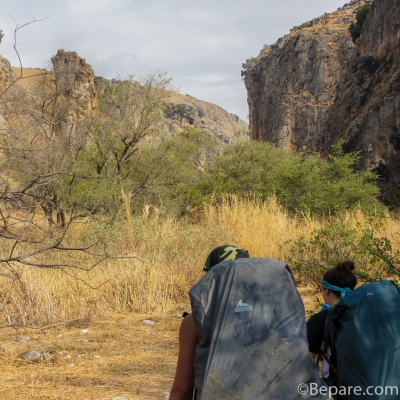 Four nights, four days, and 90 kilometers. This is day one of our Yam l’Yam ים לים or Sea to Sea hike across Israel. 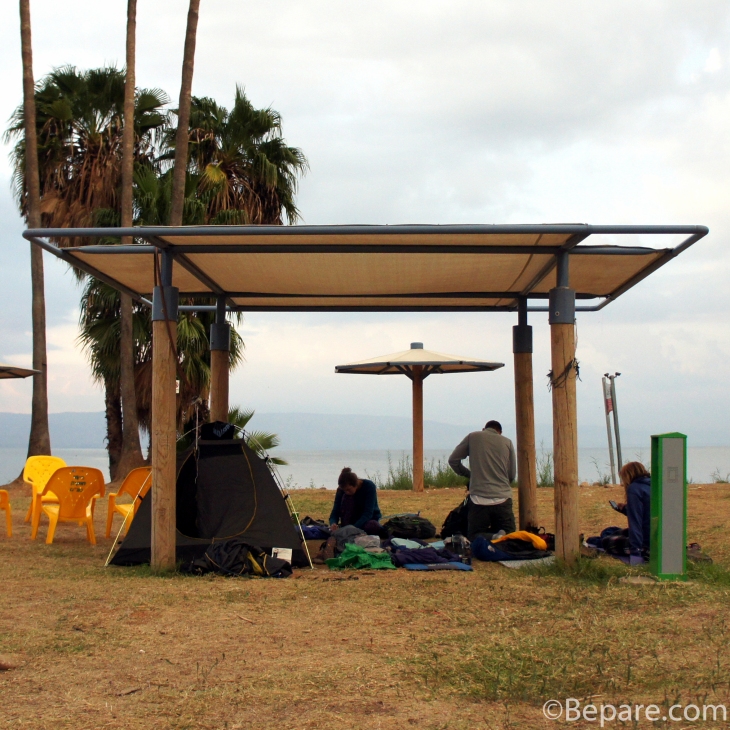 After a bit of a mishap the first night, thinking we could camp along the beach in what I thought was a town but turned out to be a Kibbutz, we lucked out and ran into a soldier waiting for a ride back to his house who directed us to an official camping area along the Kinneret. It cost 60nis to park your car, but camping was free, so since we had no car it cost us nothing.

The next morning I took what would be my first and last shower in a week of hiking both on the North Trip and the Yam l’Yam.

After setting out in a torrential rain, and unable to find where the official trail began, we hiked a few kilometers along the road until it crossed a river valley.

The rain stopped along the way, and as soon as entered the valley, we were transported into an entirely different world.

It was full of caves and sandstone pillars and more ants than I had seen in the entirety of my life up until that point, and felt like we were somewhere in the Midwest US rather than Israel.

About an hour and a half into the hike, we encountered an incredibly bizarre set of stairs. Someone had blasted amazingly long channels into each side of the valley, and then poured super steep and very narrow concrete steps. (To give you some scale, the box-shaped structure at the bottom of the above picture was roughly 4 feet high.)

There were gates at the bottom of each side saying that trespassers would be punished.

Not sure if it was a military base, we opted to err on the side of caution and head back down without exploring futher.

Further along, we came to an old, rusty windpump. Which I decided to climb. It made for a cool photo from the top, above the treeline.

During the hike we encountered all sorts of animal remnants. None of us know animal biology, but we speculated this was a goat based on the teeth and the size of the jaw bones. 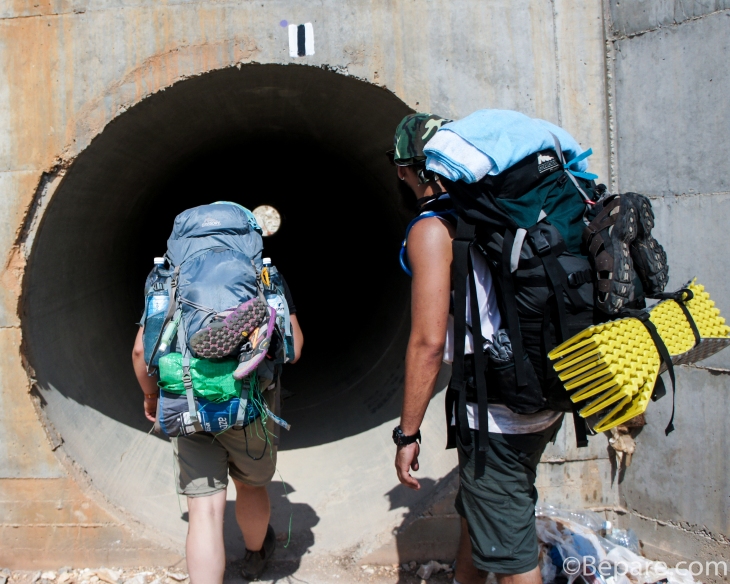 The hike was mostly through really beautiful river valleys, but there were times that we had to cross roads. Or, more precisely, cross under them. There were more than a few giant drainage tunnels that we ducked our way through along the length of the hike. 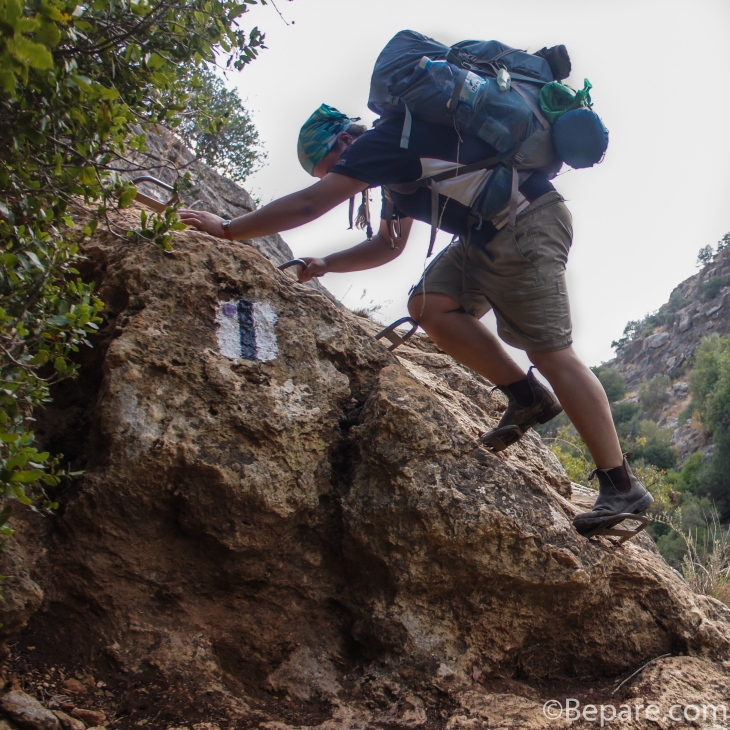 The trail we were on that day was a black trail, but it was also overlapped with a section of the Shvil Y’Israel שביל ישראל, or Israel National Trail, which traverses North-South across the entire country. It’s a very well developed path (in terms of maintenance and markings), and at points even had metal hand rails put in to aid hikers in particularly steep and slippery areas. Much of day one was like this.

By the end of the day, we were fucking exhausted. It was hot, and way way way hillier than we imagined. And we were carrying the heaviest our packs would ever be, and were the least accustomed to hiking at that point. And the day ended with a 20+ minute hike literally up the side of the canyon to a small park at the top.

Still, it was a very rewarding way to end the day.

This old structure was the first of many ruins we would see along our journey.

After dropping our bags, Shayna and I walked 1.5km toward town to a gas station outside of Tzfat we had marked on the map. We were almost out of water, and did not want to hike the next day without any. Unfortunately, it was the eve of a holiday, and the gas station was closed. This would be a theme on our hike.

We found a sketchy unlocked bathroom on the side of a building supply store, though, and filled up on water there, hoping that we wouldn’t come down with Ebola or SARS from drinking what might have been unpurified water.

Turns out it was fine, but you never know.

We quickly made camp, cooked mujaddra for dinner, and passed out by 9.