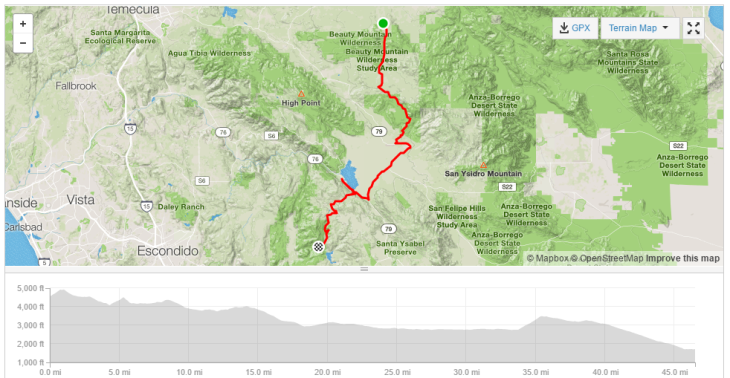 Except for the white power graffiti in the RV park’s bathroom and getting intentionally coal rolled, day four was great.

Oh, and the murderer in the woods.

After the insanity that was the day before, Morgan and I opted to sleep in. We’d set an easy (we hoped) goal for day 4 – an abandoned campground along a river about 45 miles from Anza.

It was dark when we’d arrived at the RV park, and so late that we didn’t bother asking about bathrooms or showers. We just peed in some bushes and went to bed. In the morning, realizing just how filthy we were, we found the maintenance man – a grizzled military veteran based on the USMC shirt he had on – and got the code to the bathroom.

We showered quickly and it wasn’t until we were brushing our teeth that we noticed the graffiti. Specifically white power and neo-nazi graffiti. All over the bathroom.

We packed our shit and noped the fuck out of that place. It was less than a mile down the road that a pickup truck coming from a side street, which was waiting an oddly long time to turn onto our road, pulled out right in front of us, downshifting* to intentionally blow exhaust in our faces.

No, I mean we literally could not leave Anza fast enough. The way out of town was up a long dirt road into the mountains and we were tired.

This road wasn’t part of the route. When we woke up in the morning both Morgan and I agreed that we weren’t excited about all the elevation gain we were seeing on the next leg of the journey, which would have taken us into Idyllwild, where the race’s route official begins and ends. We also were worried that if we made it to the bike shop that the route designer owned, we would end up punching him in the face because of Day 3.

So we decided to nix about 60 miles from the route and cut across the loop to a point closer to San Diego.

I’ll never know if this was the best decision, but I can definitely say it was a good decision. After a 7mi or so detour, we met back up with the route just as it crossed through a really beautiful park. In the picture above you can see the road we followed extending all the back into the hills. It was beautiful and flowy with great weather and lots of flowers. We were feeling a lot better after the day before.

For lunch we detoured about 5 miles off the route to hit up a cafe. Since we were planning to camp at an abandoned campground we wanted to be sure to get some real food while we could.

It was a biker bar but based on the looks we got when walking in it wasn’t our kind of biker bar. Still, the french fries and burrito were pretty good.

The route from lunch brought us immediately up a steep climb, which Morgan kindly demonstrates here:

The rest of the day was amazing. It was mostly downhill on either paved or smooth dirt roads, through some of the most beautiful lush valleys we’d seen on the trip. We were in ranch country, as the No Trespassing signs every few hundred feet reminded us.

Black Canyon Campground was a trip (again, literally. I slipped as we pulled into the campground and almost fell off a 3ft lip from the side of the road into the river). Hidden San Diego has a great write-up about the site:

Black Canyon Campground is shown on a county map from 1948, and has been closed since the early 1980s, but traces of its existence remain… In the mid-1970s, the quiet spot outside of Ramona had started to attract a rougher crowd and local motorcycle groups began to frequent the area. Parties grew rowdier; nudity, drinking, and drugs were commonplace. In only two months, more than fifty arrests were made by local law enforcement.

After poking around in the brush we did find a perfectly flat, seemingly paved site, still numbered Campsite 10 as you can see in the photo above. We also found a cache of 14month-expired food and a plastic skeleton in a potted plant. I have no idea what the deal was with that. 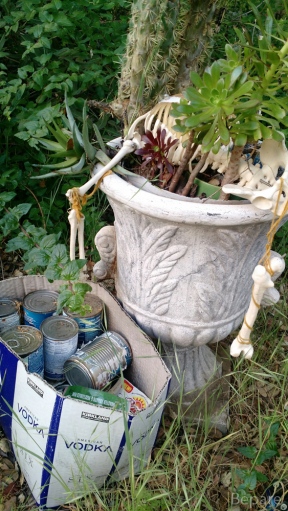 After setting up tents we took a bath in the river, cooked some dinner, and went to bed. 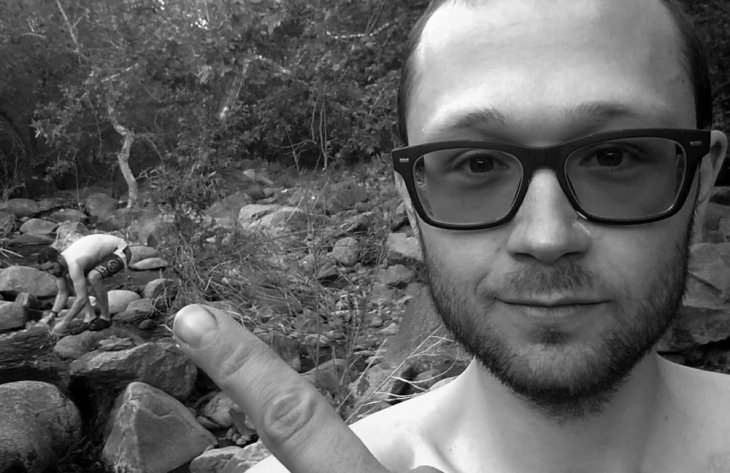 Or tried to. It was about 8:15pm and I was listening to my headphones when Morgan yelled, “Ben! Was that you?!”

“That noise. It sounded like something clinking outside of my tent.”

The Zodiac Killer was from California. He was also never caught.

We spent the rest of the night holding a knife (Morgan) and pen (me) until we finally fell asleep. Thanks for that, Morgan.

*Disclaimer: I have no fucking idea how coal rolling works or what downshifting is; it just sounded like a reasonable description