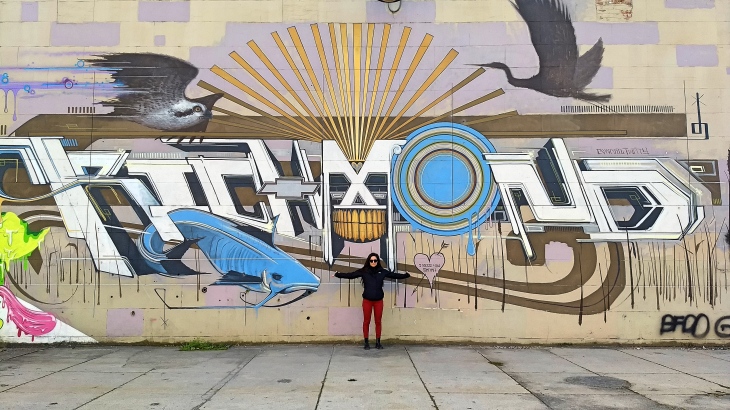 In the two years since I last posted, a lot has changed. Notably I rode my second double century, moved back into Boston proper, got married, and started working as a software engineer. Not necessarily in that order.

Right now Charly and I are in Richmond, VA exploring the city and surrounding areas.

We had a few hours after our flight landed but before checking in to our room so picked a random conservation area outside the city to visit beforehand.

Turns out Dutch Gap Conservation Area abuts Henricus Historical Park, where you can “experience what it was like when the first English settlers moved to America” and see how they would have lived in 1611 the non-fictional village of Henricus.

It looked hokey and awkward but we paid our $18 anyway and actually had quite a good time.

From Henricus we made our way to The Fan district, where we’re staying. We forgot it was St Patrick’s day and found ourselves behind a pahalanx of police as they cleared the streets of the parade.

(^Not part of the parade)

Richmond has seemingly limited their breweries & cideries to a part of town called Scott’s Addition which was our destination. We intended to visit a few of them but with the hecticness of the post-parade crowd, Buskey Cider ended up being our only stop.

On the upside, we found a place with vegan donuts on the walk home!

Day 2 started early at Belle Isle. Actually is started across the river in the parking lot, and then we crossed a really cool pedestrian bridge suspended under the highway to get to the island. It’s a recreation (swimming, hiking, biking) island only with some abandoned factory buildings, an old quarry, and even a mountain biking skills area. Really cool to have in the heart of the city.

Because it’s down by the river and the trains, I got to stand underneath a moving freight train for the first time! (Not that it was specifically on my list, mom, but it seemed worth experiencing.)

There’s also a really sketchy, city-sanctioned walk out onto a water(?) pipe that runs along and, further upstream in, the James river. It’s hardly narrow enough to pass other people on the walkway, and eventually the walkway just ends and you keep going until the water running over the pipe threatens to knock you off:

After a 2 hour trolley tour with RVA Trolley, we walked up to Church Hill and got vegan pies at Proper Pie Co.

And then it was on to the Edgar Allan Poe museum!

Poe was raised in Richmond by foster parents, so the museum has quite a collection of Poe artifacts. Including his socks and nail file.

It felt a bit culty and weird, but was interesting to learn that he seemingly only wrote dark/mysterious pieces because that’s what sold – not because he was a super weird or depressed guy. In fact they had a copy of his best-selling book about seashells.

Of course they had to have two black cats wandering the grounds.

For dinner we went to GwarBar. It’s exactly as it sounds – a Gwar-themed bar. I was super excited and ended up fucking hating it. It took over an hour to get our food, and that was after they told me ~35 minutes in that they didn’t have the dish I ordered. To top it off my food was bad. I guess that’s what you get when your business model is a gimmick. Charly at least liked her food. 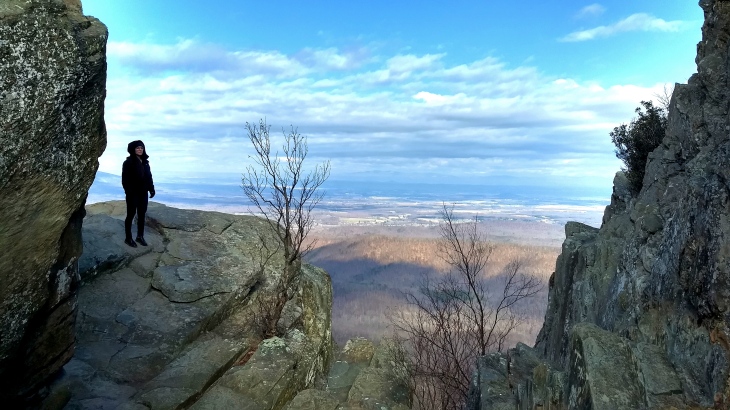 Today was our last day with the rental car so we took advantage and drove out to the Blue Ridge Parkway. Nothing’s green yet, and in fact there’s a ton of damage all throughout the area from a recent ice storm that felled thousands of trees. But we had a nice hike up to Humpback Rocks and saw some nice views.

A quick lunch at Taco Bell (our go-to roadtrip spot for vegan options) and then about an hour in Charlottesville. The college campus is beautiful and they have a really nice pedestrian-only main walking strip.

Tomorrow is our last day in Richmond and then we’ll catch the midnight bus to Charlotte, where we’ll rent a car and head to Asheville!