Italy has been a blast. I’ve ridden every day for the past 9 days, so I’m taking today off as a rest day.

END_OF_DOCUMENT_TOKEN_TO_BE_REPLACED 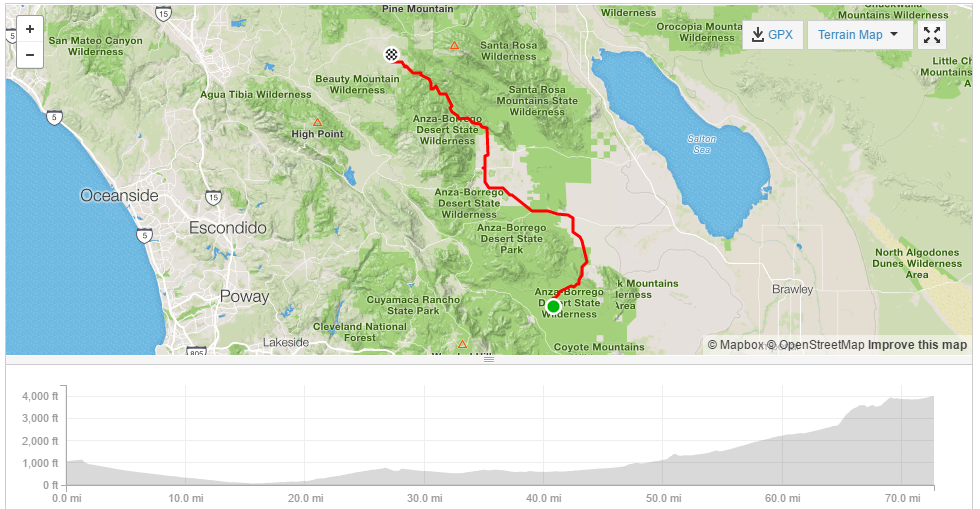 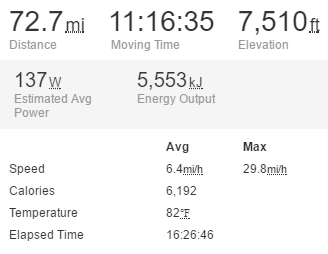 It’s hard to put day 3 into words so this post will be brief. It was the most physically and mentally challenging day I have ever had on a bike. In Morgan’s words, “It was bullshit. Hell on earth.”

END_OF_DOCUMENT_TOKEN_TO_BE_REPLACED

Today I took a break from watching the Tour de France.

Get off my face you stupid beautiful butterfly, I’m trying to climb a mountain.

Today we rode a total of 62 miles and climbed ~8200 feet, or nearly 30% the height of Mount Everest. 6800 of those were in the first half of the ride from our house to the top of the Col du Galibier.

I realized I lost my driver’s license, debit card, and ~€35 somewhere between leaving the town of La Grave for the summit of Galibier, and returning back to La Grave. While it took just 21 minutes to come back down the mountain to town, it had taken over an hour and forty minutes of non-stop climbing to reach the summit. Maybe you had to be there, but not turning back to reclimb in search of the cards was a no-brainer. Hopefully I have enough cash to finish out the trip.

It was a long ride. And the day ended with our usual climb up 30% of the height of Alpe d’Huez, with my Garmin reading 103.6F. It made me wish for the beer hand-up I got on my ascent yesterday. 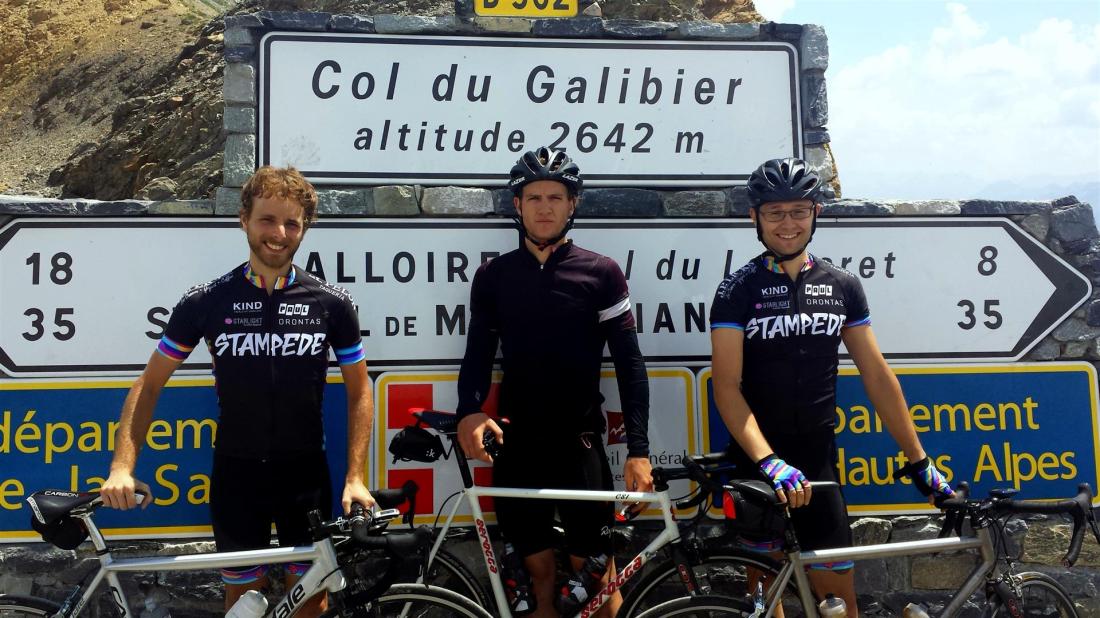 Three of the 6 of us that summitted today

It’s been hard to find time to write about our trip so far. And even harder to actually type it on my netbook.

Our flight from Boston to Canada was uneventful. Passing through Canadian customs, which used printers from the early 90s, Chris wasn’t allowed through because he lost his boarding pass for the second flight. With only 30 minutes to boarding, we nearly planned on doing the trip without him. As is his skill, however, he reappeared from some random part of the terminal having secured a new pass and gotten through customs in time to catch the flight.

From Canada to Geneva was similarly unexciting. I learned that Gangs of New York is a nearly 3 hour film, and that one serving of wine on an empty stomach is enough to get me pretty buzzed. We landed in Geneva, Switzerland and discovered the giant Nutella jars from my previous post, and weren’t sure whether to be amazed or disturbed that every single airport ad was for watches.

In the airport we met Milica’s dad, and began what turned out to be a very long day of train rides. The short version is that after missing our first train and spending 1+hour in limbo between Switzerland and France, and then waiting another 1.5 hours between trains, and then making it to the car rental place with 3 minutes to spare after another train delay, we piled us and our gear into the van for the drive to the house.

3 in the front, 4 closed up in the back (including me), we arrived at the house only to discover that the local grocery store was closed (at 7.30pm!). Starving, we got an overpriced and underprepared meal of pizza and french fries from town and went to bed early.

Our first full day started with a trip to the grocery store. Having ridden in the back of the van to the house, this was my first time seeing our surroundings and the road to the house. Thankfully. If I had known what we would be driving up, I doubt I’d ever have agreed to ride in the back of that giant van. Our house is 20% of the way up L’Alpe d’Huez, and only about 3 miles from the grocery store, but coming back up those 3 miles (specifically the 2 miles on the mountain) are some of the toughest miles I’ve ridden. And the narrow roads and lack of guardrails making driving it in a van a less-than-comforting experience. The bike ride up, combined with a slight difficulty in breathing from the elevation, made for a rude awakening.

After unloading groceries (French grocery stores do not supply or sell any bags, so this was a chose), we set out as a group to explore. The views here are incredible. My pictures don’t do them justice. Mountain roads, tunnels, incredible hairpin descents, blue rivers and snowcapped peaks – it’s amazing. Most of us rode about 32 miles with 5,000 feet of climbing. Doug and Chris are crazy and also summited Alpe d’Huez on day one. The sun sets close to 10pm here, so dinner was late and we didn’t get to bed ’til near midnight.

Today we had to return the van. 4 of us drove to Grenoble, while me and two others rode in the direction of Grenoble hoping to meet them on the way back. We managed 22.4 for the 23 miles out despite a stiff headwind thanks to a slight downhill. We never did find the other group, so we headed back (this time at closer to 16mph). I got to town last, where Eric and Chris were waiting. They planned to ride all the way up Alpe d’Huez, while I had no interest. Telling them I was 90% ‘definitely heading back to the house,’ I left on my own to return home and rest.

The turn off for our house is at the 6th switchback (6th from the bottom; technically the 16th of 21 counting down from the top) on the mountain road. That turn off also has a restaurant and water fountain. I stopped for water and decided I felt good enough that I’d explore further up the hill just to see what it was like. The road eased up noticeably (from 9to10% to 7to8%) so I just kept going. By the time I hit the the 12th switchback I figured I’d put in enough effort that I might as well go all the way to the top. So I did.

I watched my heart rate and tried to take it easy, but there is nothing easy about riding up the mountain, especially in 90F heat. I spent a few minutes at the top (which was 77F thanks to the elevation) and then came back down to the house. We cooked a big meal of rice, lentils, and mashed french fries (long story) and are now ready to pass out.

Doug and Chris are scheming over a ride for tomorrow that is 30-50% more climbing than Alpe d’Huez, but I have neither the energy nor the trust in my knee to attempt something like that so soon. I’m not sure what the rest of the group is doing, but you can be confident it will include plenty more climbing. 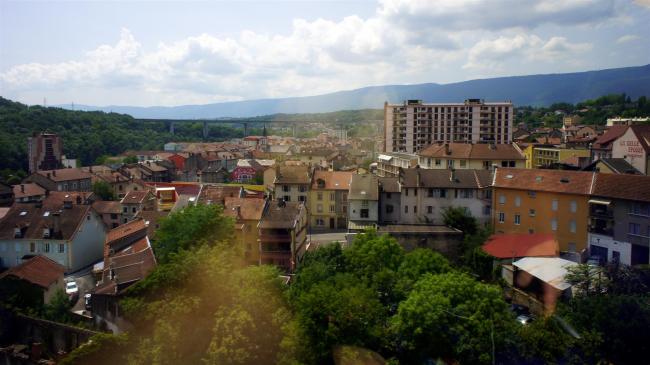 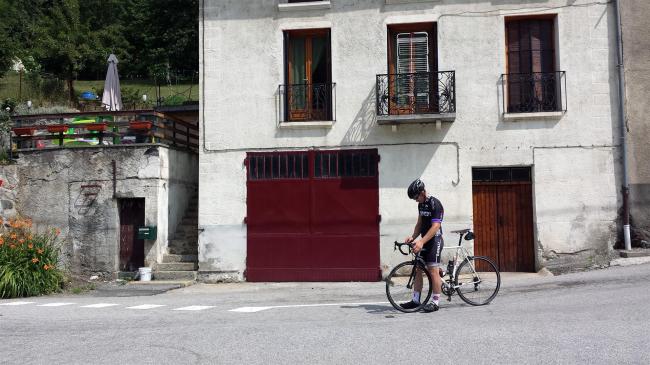 Today’s ‘easy’ day of 32 miles took us up a mountain, through two mountain passes, and about 80%  as much climbing as the 115 mile ride I often do to Mount Wachusett back in Massachusetts.

The views are incredible, the descents are amazing, and the climbing is grueling.

It’s been some time since I’ve had an update worth posting, but the next two weeks should prove to have quite a few.

Tomorrow I fly from Boston to Geneva with three of my cycling teammates. From there we’ll take the train to Grenoble, where we’ll meet two additional teammates before piling into a rented Mercedes sprinter van and heading out to our house midway up the Alpe d’Huez. 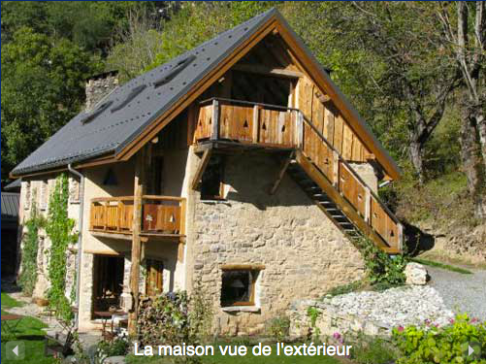 On July 18th we’ll spectate as the Tour de France conquers Alpe d’Huez twice in one day. Keep an eye out for us on TV. July 19th we’ll likely head out to see the staging and departure of stage 19 in Bourg-d’Oisans. The rest of the time we’ll be riding, wining, paragliding (maybe), and just generally taking in the views.

This is my first time traveling with a bike, and I have to say I’m a bit nervous. I was able to borrow a sturdy bike box from a good friend, but I’ve heard that while the TSA likes to open the boxes, they don’t seem to like to close them back up exactly the way they found them. So I’ve got my fingers crossed that everything arrives (and returns) as I packed it.

I’ve been in need of a break from Boston for months now, and this trip has given me something to look forward to. To know that in just a few days I’ll be watching the 100th Tour de France on the slope of the most famous Tour mountain is incredible. I can’t wait!

Stay tuned for updates and pictures once we arrive!